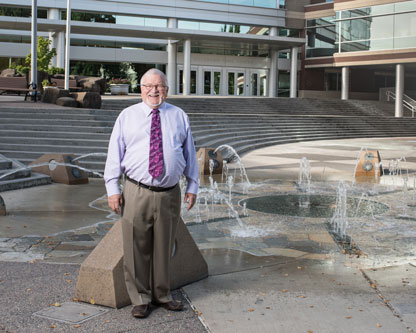 Tom was elected President of Metro Council in 2011 by voters from throughout the region and re-elected in 2014 to a second four-year term.  As President Tom presides over the Metro Council, sets its policy agenda and appoints all members of Metro committees, commissions and boards.

Tom was born and raised in Hillsboro. After graduating from Hillsboro High School, he earned a bachelor's degree in history from the University of Oregon and then went on to earn his master’s degree, also in history, from the University of Arizona in Tucson. Tom decided to pursue a career as a teacher, and, after receiving a teaching certificate from Portland State University, he taught government and history at Aloha High School for 30 years.

Tom’s first experience serving in elective office began in 1976, when he won a seat on the city council of his hometown, Hillsboro, which is the fifth largest city in Oregon. He served on the council, Hillsboro’s planning commission and was a member of Hillsboro’s planning and zoning hearings board and Hillsboro High School’s budget committee.  In 2001 Tom was elected Mary of Hillsboro. During his tenure, Hillsboro became recognized as one of Oregon’s most successful communities in both economic prosperity and a high quality of life.  As mayor, Tom led the effort to attract and retain major high-tech and renewable energy employers and secured state and federal funding for significant transportation investments, including highways, light rail and an innovative “intermodal transportation facility” serving downtown Hillsboro. He also served as president of the League of Oregon Cities, chair of the Metro Policy Advisory Committee, and as a member of the regional Joint Policy Advisory Committee on Transportation. He had served as Hillsboro’s mayor for eight years when he stepped down in 2009.

As Metro President, Tom has worked to bring this focus to Metro, leading the regional agency participation in the formation of Greater Portland Inc, the region’s economic development advocacy organization.  He has also led the charge to locate a headquarters hotel next to the Oregon Convention Center with a public-private partnership that will create thousands of local jobs and attract millions of dollars in new tourist spending to the Portland region. Tom serves on the Greater Portland Inc. board of directors, Regional Arts and Culture Council “Work for Art” Leadership Cabinet and as a member of the Governor Kitzhaber’s Oregon Solutions Steering Committee.

Tom and his wife Gayle have lived in Hillsboro for 40 years and have two daughters, Kristen and Karen. In addition to his public service, Tom dedicates part of his spare time to volunteer community service, serving on the boards of the Community Action Agency of Washington County and the Hillsboro Community Foundation. In 2009, Tom’s contributions to his community were recognized by the City of Hillsboro, which renamed the plaza at city hall in his honor, and also by the Hillsboro Chamber of Commerce, which named him their distinguished citizen for 2009.