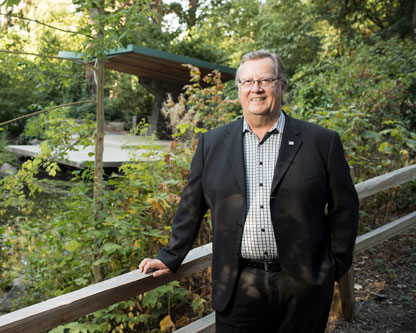 Les is the founder, owner and President of Lithtex Printing Inc.  Shortly after graduating from Hillsboro Union High School Les joined the Army where he trained as a printing specialist while serving tours in Washington DC and Frankfort Germany.  Upon completion of his Army commitment Les joined the Hillsboro Argus in the commercial printing department where he perfected his craft. In 1973,  Les' dream of owning his own business came true and Lithtex Creative Printing was born. Les and his team have nurtured and grown Lithtex over the past 43 years to become one of Oregon's largest print communication organizations.  Lithtex' s state-of-the-art facility in Hillsboro not only does fine commercial printing but offers business print and communication solutions including fulfillment to an impressive list of award-winning customers.  Lithtex has a team of 60 of Oregon's leading innovator and printing solutions providers.  Les’ proudest company accomplishment was receiving the honor of being selected Hillsboro's "Business of the Year" in 2010 by the Chamber of Commerce.

Les has also founded several small companies, mostly in the print communication and real estate development fields, and helped his wife open a beauty salon and an antique store that she managed and ran.  Les currently owns and operates four small businesses in the area. His love for small business development has kept him involved in business organizations and community service groups that support and promote local small business, which he views as the economic engine of America.

With his wife Pamm, Les also owned and operated "The Hideaway', a 32-acre private picnic retreat in the foothills of the coast range, north of Banks that hosted large corporate events for up to 3000 people. In 2009, after over 20 years of company picnics and corporate events, they closed the resort and have developed the property into 8 beautiful small acreage rural homes. They still call this home and live there to this day.

His affection for parks is actually what led Les to the Hillsboro Community Foundation. Through his in-kind donations benefiting the Jackson Bottom Wetlands Preserve, Noble woods and The Glenn Walters Cultural Arts Center, Les was introduced to the Foundation by board member Robert Evans.  Les was looking for opportunities to become more involved, and saw the Hillsboro Community Foundation as an opportunity to use his time and interests to benefit the community.

Through Lithtex Printing, Les has provided in-kind support for the Hillsboro Community Foundation and its signature project, the Glenn and Viola Walters Cultural Arts Center as well as several other foundation projects. His contributions have also benefited the Greater Hillsboro Area Chamber of Commerce, local Rotary clubs, the Hillsboro Library Foundation, the Make a Wish Foundation, and many others.

Les is currently involved with The Hillsboro Chamber and a Past board chair, a past Beaverton Rotary Club board member, Washington County Visitors Association board member, Hillsboro Downtown Partnership board President, and member of Washington County Business Council, Intel Citizens Advisory Panel, Westside Economic Alliance, Westside Transportation Alliance and serves on several Chamber and city committees. Lithtex is also a proud sponsor of the Hillsboro Hops Baseball organization.   He is also affiliated with several professional organizations, including the Printing Industries of America, Graphic Arts Technical Foundation, National Association of Printers, a printing industry peer group of American and Canadian printers and The Portland CEO Guild.  Les was honored by the Chamber of Commerce with the 2015 Hillsboro’s Distinguished Citizen Award.

Since l964, Les and his wife Pamm have lived in the Washington County. They very much enjoy having their four children and seven grandchildren all live in the immediate area and spending time at the lake in Lincoln City.